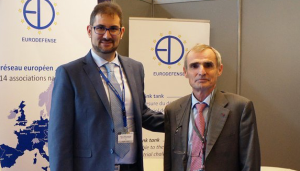 At Eurosatory 2016 we had the honor and the pleasure of interviewing Patrick Bellouard, president of EuroDéfense France. EuroDéfense is a network of national associations aiming at promoting the establishment of a common European defence policy. We had a very interesting talk about the future of European defence, and EU troubles in advancing the European Defence and Technological Industrial Base (EDTIB).

Mr. Bellouard, is Eurosatory relevant for European defence issues? What EuroDéfense France will be doing here?

First of all, as president of EuroDéfense France, I am here to inform defence industry companies about our association’s activities and objectives. We hope they will listen to our ideas about the future of the European defence, as they should understand that their role implies some degree of responsibility in substantiating the defence of Europe though increased cooperation. In fact, many industrial managers seem to manage their companies as if they were not fully aware that in the defence domain they are part of a bigger picture that requires strategic planning for Europe-wide geopolitical goals. As a consequence, their strategic choices seem often short-sighted. Instead, we believe European defence industry companies should change their attitude and look at the long term benefits of a European integrated defence industrial base rather than aiming at short and midterm revenues only. In addition, defence investment in Europe is often insufficient to maintain industry competitiveness in the defence market at national level. Then the only solution to maintain a competitive industrial base in Europe and to keep some technological edge on potential enemies in the future is to increase cooperation in Europe. EU Nations can no longer act alone.

So, do you think a European industrial base is possible in the defence sector? To what extent?

Competition is worldwide, then we must make sure that our European companies are competitive in the world market. As national markets are no longer sufficient to support the defence industry competitiveness, companies should be encouraged to cooperate more in Europe, to put together their competencies and enhance their capabilities for competing, and to avoid useless duplications. Even when a company is leading a specific sector, that status may not last forever if it stays alone and does not try to work or even merge its capacities with other European partners. But it is difficult to make each and every one of them recognise such a paradigm.

This year most of European countries came back spending on defence, after a long period (more than a decade) of declining military spending. In your opinion, what is the impact of it on European defence and the related issues?

First of all, I want to specify that defence spending is not really increasing in Europe. Rather, it is stabilizing. The amount of extra funds pledged is limited in comparison to past shortfalls. Now the trend sees a stop to cuts, but I would not say European countries are starting to spend more. In addition, I would like to focus on how the money is spent. EuroDéfense has often reminded the authorities that what is missing most in the European “defence toolbox” is investment. If you take a closer look at today’s budget, even after the slight increase of resources, defence investment is still declining. Instead, European countries spend more on personnel. So there is no concrete improvement at the macro level, at least for now. European countries still miss the capability of long term strategy, or at least they do not take the appropriate actions which would show that they fully understand the major challenges they are facing for the future. Otherwise investment would have been the first field of action to which pledging more political and financial capital. Instead, things are still going differently, and European countries still think they can cope with tomorrow’s world and threats through reactive short term measures only. Furthermore, thinking strategically means realizing – as we already stressed – that each European stakeholder is too small to survive to tomorrow’s geostrategic challenges. EU members and their defence industry companies can no longer wait for starting sharing seriously what they have (funds, know-how, expertise, and so forth) with the others, otherwise even raising budgets will not help much. There are still too many duplications, and then funds are spent inefficiently. Even without spending more, there would be so much to do for spending better!
Finally, there is a discrepancy between statements and reality. In theory, since more than 10 years, European states have established that the percentage of defence investment spent in cooperative programmes had to raise consistently – from 20% up to 35% of the total defence investment budget in Europe – but this has never happened in reality.

So, if a new wave of innovation does not come, the newcomers might threaten seriously traditional players. With unforeseeable consequences on the balance of forces in Europe – as western defence industry companies risk to decline. In particular, Poland, Sweden, Finland and other eastern and northern countries are boosting their industrial capabilities in the field. They feel they cannot integrate as major players such as France and Great Britain hamper their integration pathways. As a consequence, their strategic agenda includes now competing rather than integrating. How do you see it? Is it true?

I think that this is an old way of thinking. Picking from my personal experience as OCCAR-EA director (Organization for Joint Armament Cooperation – Executive Administration), I can say your statement puts defence industry into blocks that are not so easy to determine. Everything is far from being black and white. I admit that some major companies may sometimes behave like that, but – at the same time – things are much more complex. There are already a number of agreements, cooperation deals, successful cooperative projects and failing ones. In short, everything is not given but, rather, dynamic. There is good and bad in that, but things are slowly moving in the right direction and there is room to avoid rigid oppositions between member states and/or industry companies and find win-win situations.

How do you see European defence in the next 10 years? Will we reach some level of credible integration?

In the short term, the Brexit will reshuffle cards and therefore there will be a moment of confusion. I would have preferred that the UK stay in Europe and work in and for the European defence project with the other nations. However, I have to admit that the UK has always acted as a brake – and a very efficient one- to slow down the European defence project. Then there is an opportunity that without the British brake the European defence project might have better times. This notwithstanding, it is clear that each situation brings threats and opportunities, and governments play a key role in grabbing or losing the second while avoiding the first. The exit of Great Britain leaves Europe with a big capability gap in military affairs that the other members might be in serious troubles to fill. On the other hand, the need to fill those gaps once for all might constitute a good stimulation for the other EU members. Finally, I hope that in 10 years all European countries, including Great Britain, will realize that putting together forces and knowledge will be mandatory and unavoidable. Otherwise, Europe as it is might cease to exist.

FIND OUT MORE ON : http://www.ilcaffegeopolitico.org/